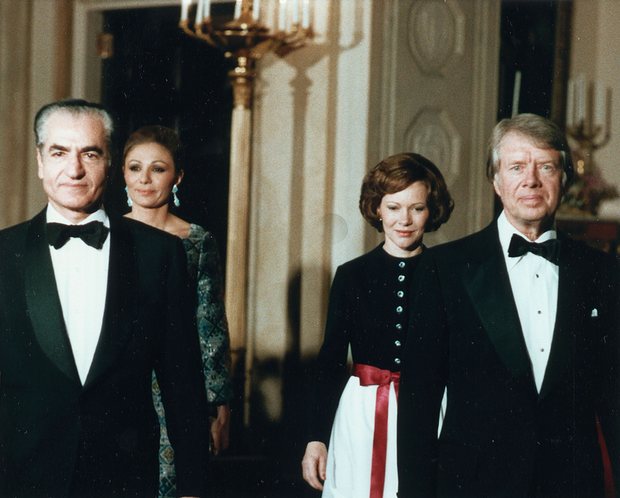 As if a light were switched off, the Shah of Iran, Mohammad Reza Pahlevi, portrayed for 20 years as a progressive modern ruler by Islamic standards, was suddenly, in 1977-1978, turned into this foaming at the mouth monster by the international left media. Soon after becoming President in 1977, Jimmy Carter launched a deliberate campaign to undermine the Shah. The Soviets and their left-wing apparatchiks would coordinate with Carter by smearing the Shah in a campaign of lies meant to topple his throne. The result would be the establishment of a Marxist/Islamic state in Iran headed by the tyrannical Ayatollah Ruhollah Khomeini. The Iranian revolution, besides enthroning one of the world's most oppressive regimes, would greatly contribute to the creation of the Marxist/Islamic terror network challenging the free world today.

At the time, a senior Iranian diplomat in Washington observed, "President Carter betrayed the Shah and helped create the vacuum that will soon be filled by Soviet-trained agents and religious fanatics who hate America." Under the guise of promoting" human rights," Carter made demands on the Shah while blackmailing him with the threat that if the demands weren't fulfilled, vital military aid and training would be withheld. This strange policy, carried out against a staunch, 20 year Middle East ally, was a repeat of similar policies applied in the past by US governments to other allies such as pre Mao China and pre Castro Cuba.

Carter started by pressuring the Shah to release "political prisoners" including known terrorists and to put an end to military tribunals. The newly released terrorists would be tried under civil jurisdiction with the Marxist/Islamists using these trials as a platform for agitation and propaganda. This is a standard tactic of the left then and now. The free world operates at a distinct dis-advantage to Marxist and Islamic nations in this regard as in those countries, trials are staged to "show" the political faith of the ruling elite. Fair trials, an independent judiciary, and a search for justice is considered to be a western bourgeois prejudice.

Carter pressured Iran to allow for "free assembly" which meant that groups would be able to meet and agitate for the overthrow of the government. It goes without saying that such rights didn't exist in any Marxist or Islamic nation. The planned and predictable result of these policies was an escalation of opposition to the Shah, which would be viewed by his enemies as a weakness. A well-situated internal apparatus in Iran receiving its marching orders from the Kremlin egged on this growing opposition.

By the fall of 1977, university students, working in tandem with a Shi'ite clergy that had long opposed the Shah's modernizing policies, began a well coordinated and financed series of street demonstrations supported by a media campaign reminiscent of the 1947-1948 campaign against China's Chiang Ki Shek in favor of the "agrarian reformer" Mao tse Tung. At this point the Shah was unable to check the demonstrators, who were instigating violence as a means of inflaming the situation and providing their media stooges with atrocity propaganda. Rumors were circulating amongst Iranians that the CIA under the orders of President Carter organized these demonstrations.

In November 1977, the Shah and his Empress, Farah Diba, visited the White House where they were met with hostility. They were greeted by nearly 4,000 Marxist-led Iranian students, many wearing masks, waving clubs, and carrying banners festooned with the names of Iranian terrorist organizations. The rioters were allowed within 100 feet of the White House where they attacked other Iranians and Americans gathered to welcome the Shah. Only 15 were arrested and quickly released. Inside the White House, Carter pressured the Shah to implement even more radical changes. Meanwhile, the Soviets were mobilizing a campaign of propaganda, espionage, sabotage, and terror in Iran. The Shah was being squeezed on two sides.

In April 1978, Moscow would instigate a bloody coup in Afghanistan and install the communist puppet Nur Mohammad Taraki. Taraki would proceed to call for a "jihad" against the "Ikhwanu Shayateen" which translates into "brothers of devils," a label applied to opponents of the new red regime in Kabul and to the Iranian government. Subversives and Soviet-trained agents swarmed across the long Afghanistan/Iran border to infiltrate Shi'ite mosques and other Iranian institutions. By November 1978, there was an estimated 500,000 Soviet backed Afghanis in Iran where, among other activities, they set up training camps for terrorists.

Khomeini, a 78-year-old Shi'ite cleric whose brother had been imprisoned as a result of activities relating to his Iranian Communist party affiliations, and who had spent 15 years in exile in Ba'th Socialist Iraq, was poised to return. In exile, Khomeini spoke of the creation of a revolutionary Islamic republic, which would be anti-Western, socialist, and with total power in the hands of an ayatollah. In his efforts to violently overthrow the government of Iran, Khomeini received the full support of the Soviets.

American leaders were also supporting Khomeini. After the Pravda endorsement, Ramsey Clark, who served as Attorney General under President Lyndon B. Johnson, held a press conference where he reported on a trip to Iran and a Paris visit with Khomeini. He urged the US government to take no action to help the Shah so that Iran "could determine it's own fate." Clark played a behind the scenes role influencing members of Congress to not get involved in the crisis. Perhaps UN Ambassador Andrew Young best expressed the thinking of the left at the time when he stated that, if successful, Khomeini would "eventually be hailed as a saint."

Khomeini was allowed to seize power in Iran and, as a result, we are now reaping the harvest of anti-American fanaticism and extremism. Khomeini unleashed the hybrid of Islam and Marxism that has spawned suicide bombers and hijackers. President Jimmy Carter, and the extremists in his administration are to blame and should be held accountable.

Article by:
by Chuck Morse