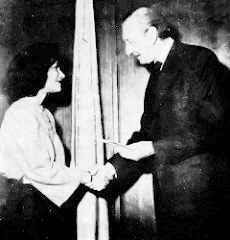 As President of: the Iranian Women's Organization and Chairman of the Iraniannian Human Rights Committee as, well as other social and educational Institutions, Princess Ashraf Pahlavi has for many years been an advocate of equal rights for women and has been active in this field at both the national and international levels.
In the past, the Princess has chaired several important international gatherings, including the United Nations Commission on the Status of Women, the United Nations Commission on Human Rights and the International Human Rights Conference held In Tehran in 1988. At such meetings, Her Highness has constantly condemned discrimination against women in particular and has underlined the need for them to participate more actively in the social, economic and educati6nal fields.
On the 10th of December 1974 (Human Rights Day), shortly before International Women's Year a Ceremony was held in New-York where the Princess presented to the Secretary-General of the United Nations, Dr. Kurt Waldheim, a Declaration emphasizing the inequalities and discrimination that women continue to suffer throughout the world and the need for greater efforts to ensure real equality between men and women.
Earlier, in a letter addressed to the Heads of Member states of the Heads of Member States of the United Nations, the Princess had invited them to endorse the Declaration, whioh had been strongly supported by the Shahanshah of lran, stressing that this would constitute an extremely valuable contribution to the success of International Women's Year.

The reader will find below:
1- The Declaration
2- The text of the speeches delivered on that occasion by Ms. Helvi  Sipila, United Nations Assistant Secretary-General for Social Development and Humanitarian Affairs; by Princess Ashraf Pahlavi, and by the Secretary-General of the United Nations
3- Replies from Heads of State or Government.

Declaration
The Fundamental principle of the equality of rights of men and women has been proclaimed in the Charter of the United Nations as well as the Universal Declaration pof Human Rights, and reaffirmed in other international covenants and instruments.
The United Nations in addition has repeatedly recognized, as in the International Conference on Human Rights, that peace cannot be maintained nor can economic and social progress be assured without the full participation of women alongside men in all fields.
Unfortunately, progress in this direction has been extremely slow and there is still a wide gap between accepted principles and established practices.

Our hope of seing women becoming a new source of equilibrium and harmony in society is based on the elimination of traditional forms of segregation in the division of labour in general.
We earnestly hope that on the occasion of International Women's Year, which is to begin on January 1, 1975, all States will consider taking concrete measures to this end.

Statement by Ms. Helvi Sipila, U.N. Assistant Secretary-General for Social Development and Humanitarian Affairs, Secretary-General International Women's Year I am privileged to welcome you, Your Imperial Highness, as an interpreter of the feelings of the international community toward International Women's Year.
You are certainly in the best position to appreciate our sentiments and to convey faithfully our interest and concerns, not only with regard to women but to the community at large.

Your special interest in human rights explain why you have been the first and only woman to preside over the deliberations of a major United Nations conference organized at the international level. It also explains why you have served as Chairperson of the Commission on the Status of Women, and the Commission on Human Rights. Hence your unique international position.

The contri'bution of Your Imperial Highness at the international level is universally recognized. Your endeavours towards the promotion of Social progress and the equality of men and women in your country is less known to many outsiders. It has been a great privilege for me to see in action the joint effort of your government and Iranian voluntary organizations, as well as your personal contribution to the success of their efforts.

When pleading for the goals and objectives of the International Women's Year, you are also acting as an eminent representative of a country well known for its successful efforts towards economic and social development. Your government is rightly acting on the premise that equality of rights irrespective of sex and age and the integration of women and youth in the development ptocess are prerequisites to social progress.

I respectfully ask your Imperial Highness to convey to His Majesty the Shahanshah my appreciation for all he has done personally and through the Iranian Government.
I would also like to take this opportunity to express to His Excellency Ambassador Hoveyda, the Permanent Representative of Iran to the United Nations, and to his staff, my warmest thanks and appreciation for their contribution to these efforts.

It is my privilege to have yoy, Your Imperial Highness, as guest of honour so as to express on this occasion my grateful appreciation in the presence of the highest ranking officials of the United Nations..."