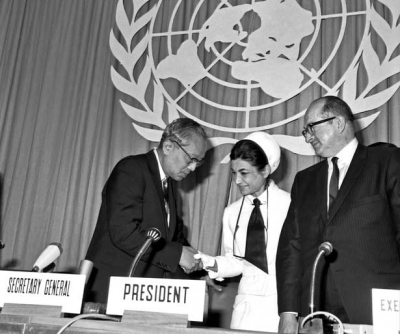 Bureau of the United Nations Commission on Human Rights

Princess Ashraf played a vital role, both in Iran and the United Nations, for the promotion of human rights. She was elected chair of the First World Conference on Human Rights, which was held in Tehran in 1968. While Western governments wanted the Conference to concentrate solely on political issues, Princess Ashraf, following her brother’s recommendations and cognizant of Third World representatives’ preference, succeeded in persuading the Western representatives in the Conference to agree to the inclusion in the final platform that economic, social and cultural issues are essential to any meaningful and realistic consideration of human rights on a global scale. It was in recognition of her many services in the cause of human rights and social welfare that in 1969 Brandeis University granted her, along with Coretta King, an honorary doctorate degree.

From left to right: Soheyla Shahkar, Iradj Amini, Farhad Sepahbody, Fereydoun Hoveyda, Princess Sharaf Pahlavi as the Chairperson, Bavand. Fate had it that Miss Soheyla Shahkar (she is now at the UNDP) became the spouse of Mansour Farhang first ambassador of the Islamic Republic to the U.N., they both are in New York. Iradj Amini has become an author and lives in Paris. Fereydoun Hoveyda is in Virginia, he writes a lot. Farhad Sepahbody who became ambassador to Morocco is now in Arizona. He still attends the UN as a part-time correspondent for a Paris press agency.

H.I.H. Princess Ashraf Pahlavi Chairperson of the Commission on Human Rights in 1970

Tweet
More in this category: « Foundation For Human Studies
back to top